If you are open to it, it changes your heart. You are stretched and increased in ways you could have never imagined for yourself. And it’s not because of seeing so many sights and enjoying so much foreign culture. It’s those things in part, but more fully it’s because of an encounter with the living Word of God, Jesus Christ, who is imaged in the people you meet who speak languages you can’t understand, in the same way that He is reflected in your best friends and classmates who spend this whole semester with you. And it’s seeing those people in the same gaze on the Rome city metro or walking through the main square in Assisi that causes your world to be made vastly larger and intimately smaller in the same moment. And you are changed.

I don’t mean to begin this blog post in such a heavy way, but I’m still trying to process and appreciate the wonder that was our school pilgrimage to Rome and Assisi, Italy, just two weeks ago. Like it happens each semester, the school leads the students in the Austria program on an incredible pilgrimage throughout those two places for ten days. During that time, you see history literally in front of you. You can reach out and touch the places that the faithful before you have walked, lived, and been buried. I climbed up the Holy Stairs that Christ walked during his passion on my knees on Ash Wednesday. I walked with my best friends through the catacombs that held the bodies of the early Christian martyrs. I gave a bundle of flowers to the Pope during the General Audience. I saw the Sistine Chapel. I’m convinced those experiences will always be hard to describe to a degree, but they were also much more than just a moment.

Before we set out on this trip, I had never been on a pilgrimage before. And while the school did a great job in preparing us for coming to these infinitely important places in our history face-to-face for the first time, I know that each student here took something unique away from their time as a pilgrim in Italy, and their heart was changed by it.

For me, that came in two ways.

First, through the tangible reality of Church history that was captured and preserved in both Rome and Assisi. I’ve studied a fair bit of Church history as an undergrad, but being in these places, actually seeing and touching them, made me realize on a whole new level just how real our faith is. That sounds so simple and silly, a fact that I thought I grasped when I decided to study theology, but it was as if I was learning it for the first time here. So many relics and artifacts and so much artwork collected and kept that it spoke with a loud, clear voice of the reality of Catholicism as it passed through history. It was incredible.

The second change, the most unexpected one, came through my encounter with the people. Like I mentioned when I first started writing, these were the strangers that I walked past or smiled at or tried to speak to in bad Italian. Seeing people for a few minutes, even if you can’t communicate with them, and then realizing that you will most likely never see them again for the rest of your life on earth is a bizarre feeling. But it also bridged this sort of gap in my mind, of feeling like the world was infinite. It made my world bigger and smaller at the same time. This became most clear to me when we were at the General Audience with Pope Francis; so many millions of people in St. Peter’s Square, many who couldn’t understand each other one bit, but all joined together in one belief. As personal as my experiences traveling were, I couldn’t help but feel that I shared them with these complete strangers who were at the same time my brothers and sisters.

I’ve written so much, and still barely scratched the surface in describing just how awesome everything – from gelato to the Vatican – was on this pilgrimage. Our pilgrimage to Rome and Assisi blessed me with a depth of conviction that I didn’t know before. It ignited my fire as a member of the Body of Christ in his Church on earth. It enriched my understanding of beauty and history. And it left me joyfully decided to live the rest of this semester, and all my life, with a pilgrim heart.

Corinne Cohagan Student Blogger All of my travels so far have been enlightening, teaching me… 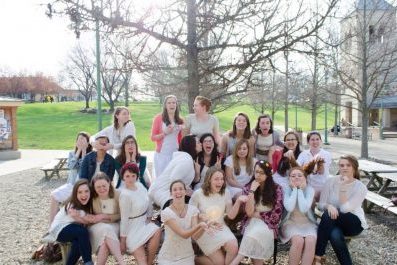 Cohagan: The View from the Hilltop.

It’s been said to me before, usually by friends of mine or others that I meet who aren’t fully aware…

Cohagan: Returning with the Imprint of Gaming.

The end of my semester abroad in Gaming. I can’t believe it. So much has happened this semester. I’ve done…